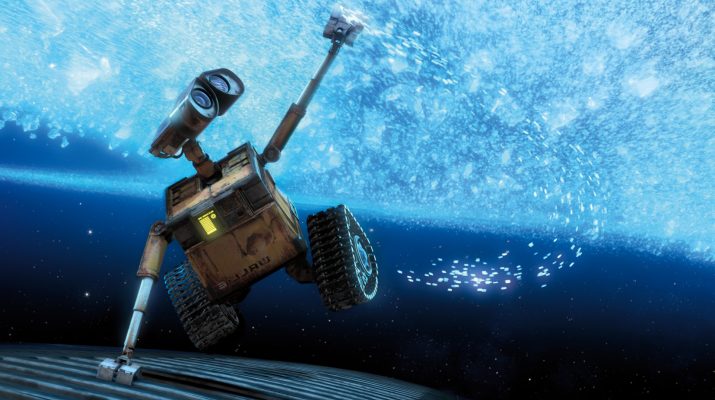 WALL-E is one of the last remaining robots, who develops a form of human-like intelligence toward the end of the 700 years spent on Earth.

The film explores WALL-E’s love for a second robot named EVA. It is yet another examination of a scenario where artificial intelligence “evolves” into human-like form – complete with fears, anger, and of course love.

This heartwarming story takes place in the distant future – 2805. Earth is nothing more than a massive garbage-heap, and Earth’s population has escaped the planet to live in starships, while the robots remain on Earth in order to clean up the planet.

Hollywood’s examination of artificial intelligence over the last several decades makes it clear that humanity hates the idea of technology that can replace us, but is moved by the idea of another intelligence that may be capable of the same emotions that make us distinctly human.
http://www.makeuseof.com/tag/hollywood-depicted-artificial-intelligence-years/

WALL-E is portrayed as a heroic and romantic figure in the film. In pursuit of his true love, the haughty robot EVE, he inadvertently ends up saving humanity, and the Earth to boot. Moreover, WALL-E (which stands for Waste Allocation Load Lifter: Earth-Class) is portrayed as a diligent, obedient working-class dude. He packs his lunchbox every morning, and heads off to his job, the job of collecting and compacting the mountains of trash left behind by a civilization of over-consuming humans. Drawn as a good, romantic, hard-working guy, it is not hard to see why the figure of WALL-E surfaces in representations of Volvo’s proposed ROAR-bots. But WALL-E, the movie, is an oddly complex composition, one that, by no means, delivers Volvo from the contradictions of automation.

The film’s director, Andrew Stanton, insists that he did not set out to make a political statement about overconsumption, environmental degradation or wastefulness (Fritz 2008a; WALL-E Production Notes). These broader themes came together through a process of bricolage driven by “the idea of a little robot left on Earth.” The “WALL-E Production Notes” in the Pixar Talk Blog quote Stanton saying, “We had no story. It was sort of this Robinson Crusoe kind of little character – like what if mankind had to leave earth and somebody forgot to turn the last robot off, and he didn’t know he could stop what he’s doing?” The story is built up from this enigmatic figure.

We encounter WALL-E some 700 hundred years after the spaceships left, and after all the other robots had stopped working due to malfunction. He has miraculously developed a “personality,” and has learned to fantasize about companionship by watching old musicals on a TV. Listening to the tune “Put on your Sunday clothes” from the Broadway hit Hello Dolly, he dreams about the romantic possibilities of the world “out there,” the world “outside of Yonkers.” That libidinal energy finds its object when someone from “out there,” the robot EVE, comes into his world. EVE is, in fact, sent by the BnL spaceship to detect signs of plant life on Earth. While searching for such life, she and WALL-E become friends. However, when she acquires the seedling plant WALL-E has found, she obeys her “directive” and returns to the ship. WALL-E’s pursuit of EVE takes him from the interior space of lonely routine, out into the world where love has retreated.
https://socialrobotfutures.com/tag/wall-e/

There’s something special about Wall-E and his pursuit. Robots have been routinely humanized in sci-fi movies: in “Blade Runner,” “A.I.” and “Metropolis,” for example. And “Wall-E” also isn’t alone in implying that human beings are becoming more mechanistic ourselves, though the obese overgrown babies Stanton imagines reclining in hover chairs — pampered and cocooned from birth — is a more scathing caricature of consumer over-dependency than we’d expect to find in a Hollywood family film. Tom Charity-CNN

The heart of the film, and the source of its most inspired, bewitching scenes, is its first half hour. There’s no dialogue, just a series of bleeps, whirrs and squeaks – like a cross between the Smash potato robots and a soundtrack hatched up by the BBC Radiophonic Workshop. WALL·E gently motors across a parched earth full of faded street signs and collapsed buildings, heat and pollution, rendering the atmosphere dust-caked and poisonous red. The Telegraph

The dusty cityscape shows remnants of a civilization: an empty bank, a cratered warehouse mall, tattered billboards for colas and travel agencies, all bearing the logo of Buy-N-Large. TOO MUCH TRASH–EARTH COVERED reads an old headline, and we note that some of the skyscrapers are made of compacted trash cubes. The planet has become one huge junkyard, as if all humanity were a rock band that had made a shambles of a hotel room, then just strolled out. The only remaining sign of organic life on Earth is that unkillable little bugger, a cockroach. Richard Corliss – TIME