If you have watched “Transcendence” before, when you watch “Chappie”, you will notice that both movies use the same concept.

The desire for immortality is quite fundamental to human nature. But seeing this desire on the robot with conscious is surprising in this movie..

The new film “Chappie” features an artificially intelligent robot that becomes sentient and must learn to navigate the competing forces of kindness and corruption in the human world.

Directed by Neill Blomkamp, whose previous work includes “District 9” and “Elysium,” the film takes place in the South African city of Johannesburg. The movie’s events occur in a speculative present when the city has deployed a force of police robots to fight crime. One of these robots, named “Chappie,” receives an upgrade that makes him sentient.

Blomkamp said his view of artificial intelligence (AI) changed over the course of making the film, which opens in the United States on Friday (March 6). “I’m not actually sure that humans are going to be capable of giving birth to AI in the way that films fictionalize it,” he said in a news conference.

Yet, while today’s technology isn’t quite at the level of that in the film, “We definitely have had major aspects of systems like Chappie already in existence for quite a while,” said Wolfgang Fink, a physicist and AI expert at Caltech and the University of Arizona, who did not advise on the film.

Existing AI computer systems modeled on the human brain, known as artificial neural networks, are capable of learning from experience, just like Chappie does in the film, Fink said. “When we expose them to certain data, they can learn rules, and they can even learn behaviors,” he said. Today’s AI can even teach itself to play video games.

Something akin to Chappie’s physical hardware also exists. Google-owned robotics company Boston Dynamics, based in Waltham, Massachusetts, has an anthropomorphic bipedal robot, called PETMAN, that can walk, bend and perform other movements on its own. And carmaker Honda has ASIMO, a sophisticated humanoid robot that once played soccer with President Barack Obama.

But Chappie goes beyond what current systems can do because he becomes self-aware. There’s a moment during the film when he says, “I am Chappie.”

“That statement, if that truly results of a reasoning process and not trained, that is huge,” Fink said. An advance like that would mean robots could go beyond being able to play a video game or execute a task better than a human. The machine would be able to discriminate between self and nonself, which is a “key quality of any truly autonomous system,” Fink said.

As opposed to the “Terminator”-style killing machines of most Hollywood AI films, Chappie’s persona is depicted as childlike and innocent — even cute.

“We still had Sharlto onset [as Chappie],” Harvey told Live Science. But unlike many other special-effects-heavy films, “Chappie” did not use motion capture, which involves an actor wearing a special suit with reflective markers attached and having cameras capture the performer’s movements. Instead, “the animators did that by hand,” Harvey said.

Because Chappie is a robot, Harvey’s biggest fear was not being able to have it convey emotion. So, his team gave Chappie an expressive pair of “ears” (antennae), a brow bar and a chin bar, which could express a fairly wide range of emotions, “almost like a puppy dog,” Harvey said.

In the film, Chappie’s “humanity” is sharply contrasted with the inhumanity of Hugh Jackman’s character Vincent Moore, a former military engineer who is developing a massive, brain-controlled robot called the “Moose” to rival intelligent ‘bots like Chappie.

“The original concept for Jackman’s character was always to be in opposition to artificial intelligence,” Blomkamp told reporters.

Jackman himself takes a more positive view of AI. “Unlike my character, I like to think optimistically about these discoveries,” Jackman said in a news conference. “I’m a firm believer that the pull for human beings is toward the good generally outweighing the bad.”

But billionaire Elon Musk and famed astrophysicist Stephen Hawking have sounded alarms about the dangers of artificial intelligence, with Musk calling it humanity’s “biggest existential threat.”

Truly autonomous AI is not something most researchers are working on, but Fink shares some of these concerns.

“Depending on how old we are, we might see something in our lifetime which might become scary,” Fink said. If it gets out of control, he said, “then we have created a monster.” (http://www.livescience.com)

Sony Pictures released a new movie last week called Chappie. Chappie is the latest movie to address the theme of the singularity, or an artificial intelligence becoming self-aware. I’m not a movie critic so I’ll leave the analysis of the directing, lighting, dialogue, and other film elements to the professionals. What does interest me, though, is the technology that goes into creating a movie like Chappie.

I’m dating myself to some extent, but I see Chappie as a mashup of the movies Short Circuit and RoboCop. It combines the endearing story of a robot gaining “consciousness” like Johnny Five in Short Circuit with the question of the ethics of a robotic paramilitary police force like RoboCop. I saw the movie over the weekend and enjoyed it thoroughly.

I’ll let you in on a little secret, though. Chappie isn’t really there. The entire role of the robot is completely computer-generated. I had a chance to speak with Chris Harvey, visual effects supervisor for Chappie, about the effort that went into putting the robot on the screen.

Computer-generated imagery, or CGI, is certainly nothing new or magical as far as movies go. Not only has it been done, but it’s done frequently and probably happens on some level in almost every movie these days. However, there are a few aspects of creating Chappie that stand out as unique. 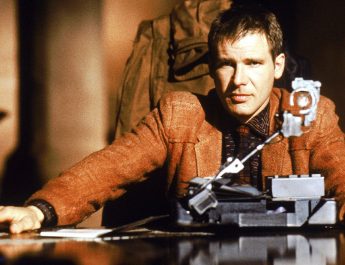