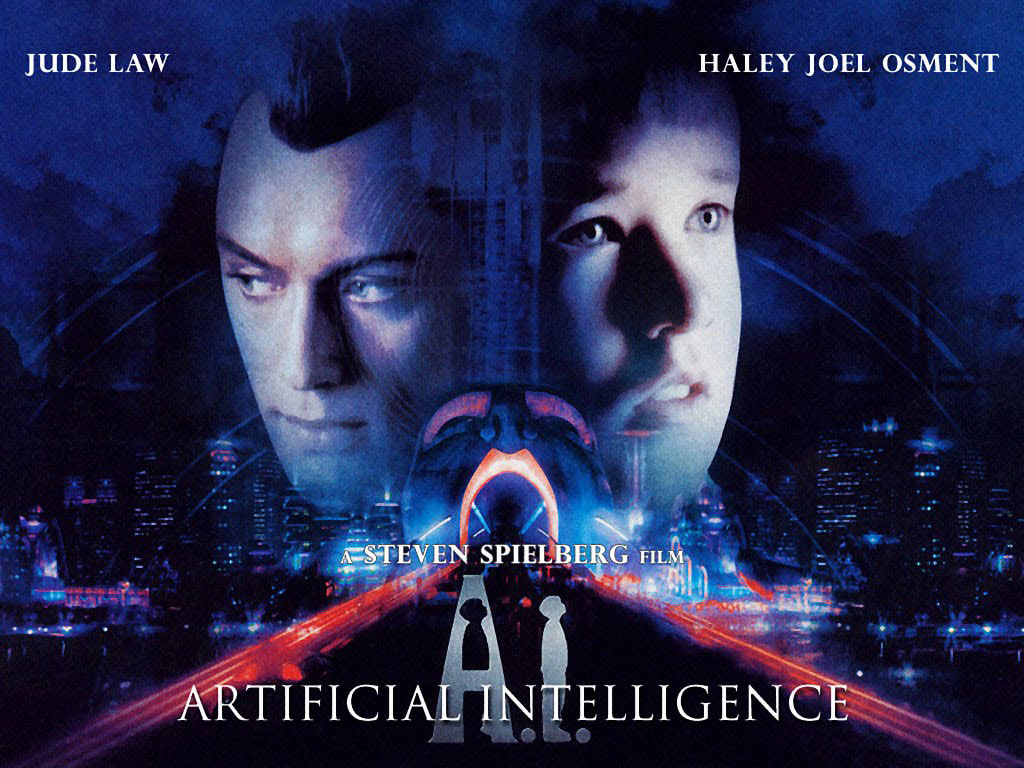 Artificial Intelligence is the Stanley Kubrick script made into a 2001 film by famed director Steven Spielberg. A modern presentation of Pinocchio, the Spielberg/Kubrick A.I. operates on multiple levels as an allegory, as well as a morality tale of mankind’s potentially disastrous future given the rise of super advanced technology. Having viewed the film numerous times since 2001, only now has it become evident how profound it really is. Fans of esoteric interpretations of film will be aware of other Kubrick classics such as 2001: A Space Odyssey or Eyes Wide Shut, but A.I. appears to have been overlooked. I recall about a decade ago getting the idea of doing esoteric film analysis occurred to me when I read a review of A.I. that argued it was an allegory of Dante’s Inferno (as David will undergo a katabasis). A decade later I still think that element is found, but the real meaning has yet to be explored in its full depth insofar as the more hidden aspects of the cryptocracy’s designs with technology have only recently come to some light. https://jaysanalysis.com/2014/12/12/artificial-intelligence-2001-transhumanist-fairy-tale/

Whatever the backstory, that Stanley Kubrick implored Spielberg to make his long-cherished, existential sci-fi epic, or Spielberg hitched a lift on the late master’s heritage, it doesn’t matter. Sure, the film is loaded with Kubrickian touches (it commences with a cold, eloquent style, it refuses to be rushed, it’s brimming with enormous, philosophical debate, its ending is potty), but this is the work of a living, breathing master – and, boy, is he good. Taking Kubrick’s nurtured sapling, Spielberg adds love, ILM miracle-grow and a fierce intellect so often overlooked (he scripted, remember), unfurling his imagination on a dazzling blend of Pinocchio, Blade Runner, 2001 and a whole lot more besides. http://www.empireonline.com/movies/artificial-intelligence/review/

Advances in technology, both cinematic and everyday, mean that it may be easier than ever to attempt an arresting portrayal of artificial intelligence in film. Look at Alex Garland’s Ex Machina, a low-budget movie by Hollywood standards that nonetheless uses convincing special effects and thought-provoking writing to create a science fiction story that might not have worked as an indie 15 or 20 years ago. Or Spike Jonze’s Her, which includes a number of low-tech dialogue scenes but feels strangely believable as a vision of the future. Yet one of the very best movies about artificial intelligence remains Steven Spielberg’s simply titledA.I. (or, as it appears on-screen and in marketing materials, A.I. Artificial Intelligence). It’s a pre-Siri, pre-Her, just barely post-millennial exploration of a robot boy programmed to feel the very human emotion of love. By Jesse Hassenger

Stanley Kubrick always referred to the story as “Pinocchio.” It mirrored the tale of a puppet who dreams of becoming a real boy. And what, after all, is an android but a puppet with a computer program pulling its strings? The project that eventually became Steven Spielberg’s “A. I. Artificial Intelligence” (2001) was abandoned by Kubrick because he wasn’t satisfied with his approaches to its central character, David, an android who appears to be a real little boy. Believing special effects wouldn’t be adequate and a human actor would seem too human, he turned the project over to his friend Spielberg. Legend has it he made that decision after being impressed by Spielberg’s special effects in “Jurassic Park,” but perhaps “E. T.” was also an influence: If Spielberg could create an alien who evoked human emotions, could he do the same with an android?

He could. As David, he cast Haley Joel Osment, who had scored a great success in “The Sixth Sense” (1999). Osment’s presence is a crucial element in the film; other androids, including Gigolo Joe (Jude Law) are made to look artificial with makeup and unmoving hair, but not David. He is the most advanced “mecha” of the Cybertronics Corporation — so human that he can perhaps take the place of a couple’s sick child. Spielberg and Osment work together to create David with unblinking eyes and deep naïveté; he seems a real little boy but lacking a certain je ne sais quoi. This reality works both for and against the film, at first by making David seem human and later by making him seem a very slow study.

David has been programmed to love. Once he is activated with a code, he fixes on the activator, in this case his Mommy (Frances O’Connor). He exists to love her and be loved by her. Because he is a very sophisticated android indeed, there’s a natural tendency for us to believe him on that level. In fact he does not love and does not feel love; he simply reflects his coding. All of the love contained in the film is possessed by humans, and I didn’t properly reflected this in my original review of the film. By Roger Ebert

Questions like this are understandable, even necessary. The world needs films like A.I. that ask hard questions: that show us, like Ecclesiastes, what life is like if there is no love or faith or hope.

Yet questions are incomplete without answers; and it would be tragic to stop where A.I. does, with shattered faith, despair of enduring or timeless love, a lonely universe of needy beings, and comfort found only in unreal comforts and loves that end in death and acceptance and oblivion.

For there is a love that does not change or die or fail, a truth that does not shatter to the touch, a Father who is not remote or uncaring. Like David, we have been made for love — not programmed, as David was, for we are not slaves to programming – but made for love, made for God, and are no more capable of true joy and peace apart from God than was David apart from Monica. By Crhis Otsuki and SDG

The reality of David’s feelings is left for the audience to judge, but if what we’re seeing is a simulation – which of course it is, because it’s a film – it’s a flawless one. Like the replicants in Ridley Scott’s Blade Runner, the mechas in AI behave with more humanity than the humans around them, which leaves us questioning the difference between their programming and ours.

“Human beings must be the key to the meaning of existence,” the Kingsley mecha tells David, and the line sounds odd until you realise these creatures hold humans in the same awed regard as humanity holds its gods. Dr Hobby’s son died so that David might live, and these new mecha are descended from David’s line.

In that light, AI’s ending isn’t twee, but wrenchingly sad. The love we’re seeing, between a mecha and a clone, is a simulacrum, as manufactured as a movie. But if it feels like the real thing to us, what does that tell us about the real thing? In that moment, Spielberg shows us real fear and real wonder, knotted together so tightly it becomes impossible to tell the two apart. By Robbie Collin