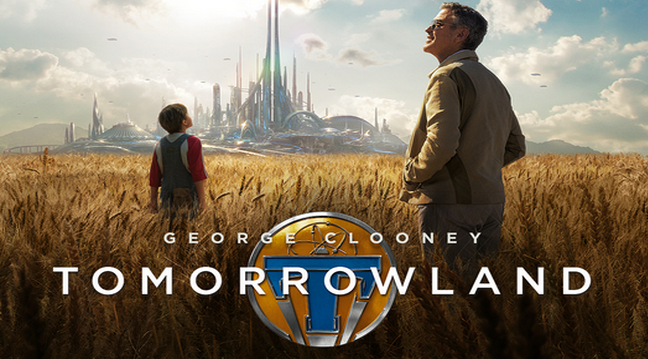 Tomorrowland is a 2015 American science-fiction mystery adventure film directed and co-written by Brad Bird. Bird co-wrote the film’s screenplay with Damon Lindelof, from an original story treatment by Bird, Lindelof and Jeff Jensen. The film stars George Clooney, Hugh Laurie, Britt Robertson, Raffey Cassidy, Tim McGraw, Kathryn Hahn and Keegan-Michael Key. In the film, a disillusioned genius inventor and a teenage science enthusiast embark to an ambiguous alternate dimension known as “Tomorrowland” where their actions directly affect the world and themselves.

“In the 50s and 60s, during the Space Race era, we thought about the future in this very optimistic way,” he said. “But something had shifted in my generation, born in the 70s, and certainly all the generations that followed, where the future is something we look at as post-apocalyptic.

“There’s going to be a war; the robots are going to take over; there’s going to be zombies or global warming is going to create tidal waves and all these things. I was like, ‘what happened?’. I’d really like to recapture that idea of optimism, of a future that we have to look forward to.”

That thought was Lindelof’s conceptual framework for Tomorrowland, the new Disney movie out this week with George Clooney in the lead.

Tomorrowland is based off a ride of the same name in Disneyland, one that gives people an idea of what a utopian future may look like.

So don’t expect Tomorrowland to be yet another Blade Runner-esque dystopian nightmare universe.
Source: http://www.news.com.au/

Childlike artificial intelligence
Of course, no futuristic world would be complete without artificially intelligent robots. One of the film’s main characters is a childlike android named Athena, whose job is to recruit bright young humans to help avert a future global collapse and the end of civilization. Athena is not meant to have ideas or emotions, but after she meets the young Frank Walker, she finds herself developing feelings — one hallmark of humanlike intelligence, or “strong AI.”

Evil robots
Like any good Disney film, Tomorrowland has villains. Some of these come in the form of not-so-intelligent Terminator-style robots. The bots are sent to kill Casey before she makes it to Tomorrowland, but despite their ray guns, they are thwarted by the many booby traps in Frank’s house, including magnetic walls, a force field that repels intruders and a door that slices people up like a cheese grater.

Thinking Machine
Perhaps the most important piece of hypothetical technology in the film is the so-called “Thinking Machine,” created by Frank Walker’s nefarious counterpart, the brilliant scientist David Nix, played by Hugh Laurie. The machine acts as a giant antenna for broadcasting pessimistic thoughts into the minds of humanity, in the hopes of averting global disaster. But it backfires, and these negative thoughts about the future become a self-fulfilling prophecy. As the film’s not-so-subtle message makes clear, the only thing that can save humanity from disaster is the power of positive thinking.
Source: http://www.livescience.com/50937-tomorrowland-movie-future-tech.html