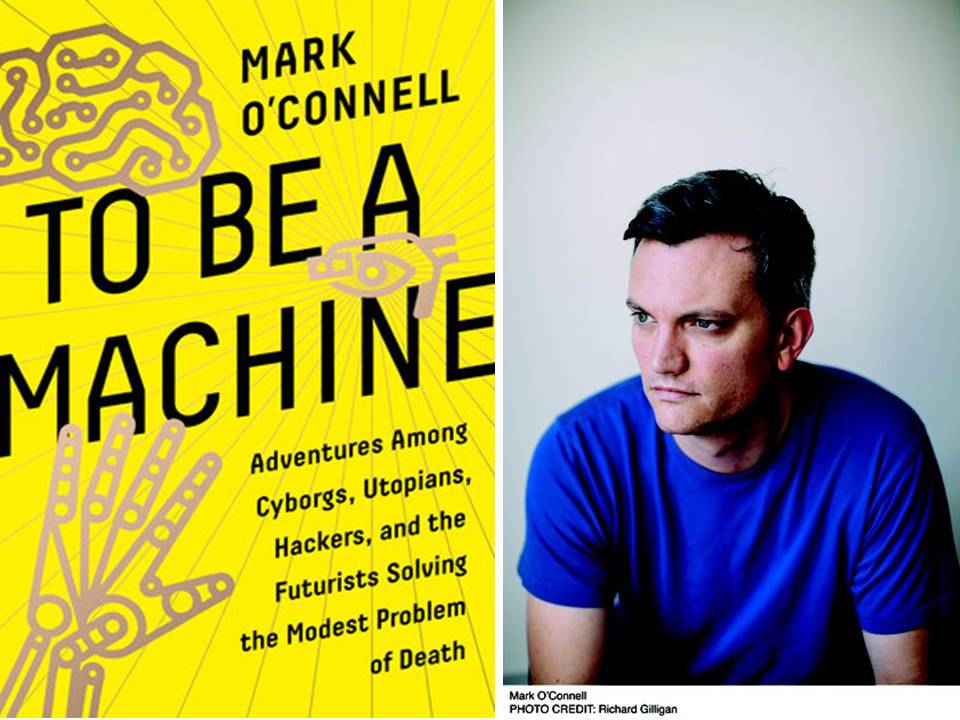 To Be a Machine: Adventures Among Cyborgs, Utopians, Hackers, and the Futurists Solving the Modest Problem of Death (Mark O’Connell)

“Flesh is a dead format,” writes Mark O’Connell in To Be a Machine, his new nonfiction book about the contemporary transhumanist movement. It’s an alarming statement, but don’t kill the messenger: As he’s eager to explain early in the book, the author is not a transhumanist himself. Instead, he’s used To Be a Machine as a vehicle to dive into this loosely knit movement, which he sums up as “a rebellion against human existence as it has been given.” In other words, transhumanists believe that technology — specifically, a direct interface between humans and machines — is the only way our species can progress from its current, far-than-ideal state. Evolution is now in our hands, they claim, and if that means shedding the evolutionary training wheels of flesh itself, so be it.

O’Connell, who comes from a literary rather than a scientific background, plays up his fish-out-of-water status, which is one of the book’s great strengths. To Be a Machine isn’t written as an insider-baseball account of transhumanism; instead, it’s framed as an investigation. With a winning mix of awestruck fascination and well-chilled skepticism, he tracks down various high-profile transhumanists on their own turf, immerses himself in their worlds, and delivers dispatches — wryly humorous, cogently insightful — that breathe life into this almost mystical circle of thinkers and doers.

Big names in the tech field such as Elon Musk, Peter Thiel, Bill Gates, and Ray Kurzweil are part of the story, but O’Connell digs deeper. His quest takes him to Anders Sandberg, a monklike proponent of cognitive enhancement; Max More, founder of the world’s foremost cryonics company, who freezes the heads of deceased clients in the hopes they can one day be revived; and Arati Prabhakar, former director of the Pentagon’s DARPA (Defense Advanced Research Projects Agency), whose competitive development of robotics has fostered everything from killer robots to those designed, eerily enough, to hug people.

Not only does O’Connell apply a healthy curiosity to his subjects, he places them in illuminating context. Amid vivid firsthand reportage, he dwells on the history and ramifications of transhumanism: economically, anthropologically, sociologically, theologically and culturally. He deftly probes the existential risk to humans in regard to the rapid advancement of artificial intelligence. He balances the impulse for self-betterment with the potential recklessness of runaway innovation. And he uses the transhumanists’ current efforts to transfer the human mind to a digital vessel as a way of rephrasing the age-old philosophical question, “What is consciousness?”

Unexpectedly, faith becomes a large component of his query — he cites the writings of Saint Augustine and the Gnostic Gospel of Thomas alongside the physicist John von Neumann and the science fiction visionary Philip K. Dick, and a conversation with a Buddhist transhumanist reveals a profound unity in how ancient religions and modern futurists view suffering.

To Be a Machine packs in a lot, but it never feels overstuffed. O’Connell lays the book out like a travelogue, going from one tech conference to another and never failing to tap into his own mix of awe and incredulity in the face of what he calls the “metaphysical weirdness” and “magical rationalism” of the transhumanist scene. He injects just enough personal background and anecdotes into his story to help humanize it — up to and including some beautifully funny and poignant insights into his own everyday struggle with technology, fatherhood, and mortality.

In one of the book’s most shocking chapters, he visits a collective of biohackers, or “grinders,” in Pittsburgh who surgically implant sensors into their flesh in order to more intimately interface with the machine world. The details are both horrifying and strangely noble, and O’Connell depicts them with sensitivity, sympathy, and a novelist’s eye for narrative. Rather than a dry treatise on science, To Be a Machine is a lucid, soulful pilgrimage into the heart of what humanity means to us now — and how science may redefine it tomorrow, for better and for worse.

Jason Heller
(Senior writer at The A.V. Club, a Hugo Award-winning editor and author of the novel Taft 2012)

Where is our obsession with technology leading us? What does the rise of AI mean not just for our offices and homes, but for our humanity? Could the technologies we create to help us eventually bring us to harm?  Addressing these questions, O’Connell presents a profound, provocative, often laugh-out-loud-funny look at an influential movement. In investigating what it means to be a machine, he offers a surprising meditation on what it means to be human.
http://www.penguinrandomhouseaudio.com