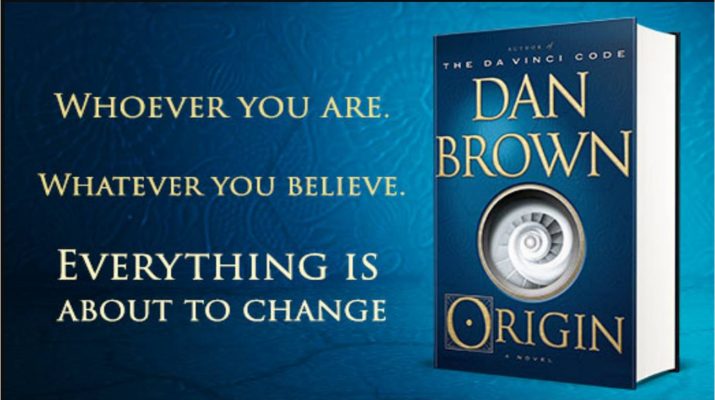 Origin is a 2017 science fiction mystery thriller novel by American author Dan Brown. and the fifth installment in his Robert Langdon series, following Angels & Demons, The Da Vinci Code, The Lost Symbol, and Inferno. The book was released on October 3, 2017 by Doubleday.

Robert Langdon, Harvard professor of symbology and religious iconology, arrives at the ultramodern Guggenheim Museum Bilbao to attend a major announcement—the unveiling of a discovery that “will change the face of science forever.” The evening’s host is Edmond Kirsch, a forty-year-old billionaire and futurist whose dazzling high-tech inventions and audacious predictions have made him a renowned global figure. Kirsch, who was one of Langdon’s first students at Harvard two decades earlier, is about to reveal an astonishing breakthrough . . . one that will answer two of the fundamental questions of human existence.

As the event begins, Langdon and several hundred guests find themselves captivated by an utterly original presentation, which Langdon realizes will be far more controversial than he ever imagined. But the meticulously orchestrated evening suddenly erupts into chaos, and Kirsch’s precious discovery teeters on the brink of being lost forever. Reeling and facing an imminent threat, Langdon is forced into a desperate bid to escape Bilbao. With him is Ambra Vidal, the elegant museum director who worked with Kirsch to stage the provocative event. Together they flee to Barcelona on a perilous quest to locate a cryptic password that will unlock Kirsch’s secret.

Navigating the dark corridors of hidden history and extreme religion, Langdon and Vidal must evade a tormented enemy whose all-knowing power seems to emanate from Spain’s Royal Palace itself . . . and who will stop at nothing to silence Edmond Kirsch. On a trail marked by modern art and enigmatic symbols, Langdon and Vidal uncover clues that ultimately bring them face-to-face with Kirsch’s shocking discovery . . . and the breathtaking truth that has long eluded us.

Dan Brown has thrown off the doldrums of “Inferno” with a brisk new book that pits creationism against science, and is liable to stir up as much controversy as “The Da Vinci Code” did. In “Origin,” the brash futurist Edmond Kirsch comes up with a theory so bold, so daring that, as he modestly thinks to himself in Brown’s beloved italics, “It will not shake your foundations. It will shatter them.” Kirsch is of course addressing The World, because that’s the scale on which Brown writes.
JANET MASLIN The New York Times

Who is Dan Brown?

Dan Brown is the author of numerous #1 bestselling novels, including The Da Vinci Code, which has become one of the best selling novels of all time as well as the subject of intellectual debate among readers and scholars. Brown’s novels are published in 52 languages around the world with 200 million copies in print.

In 2005, Brown was named one of the 100 Most Influential People in the World by TIME Magazine, whose editors credited him with “keeping the publishing industry afloat; renewed interest in Leonardo da Vinci and early Christian history; spiking tourism to Paris and Rome; a growing membership in secret societies; the ire of Cardinals in Rome; eight books denying the claims of the novel and seven guides to read along with it; a flood of historical thrillers; and a major motion picture franchise.”

The son of a mathematics teacher and a church organist, Brown was raised on a prep school campus where he developed a fascination with the paradoxical interplay between science and religion. These themes eventually formed the backdrop for his books. He is a graduate of Amherst College and Phillips Exeter Academy, where he later returned to teach English before focusing his attention full time to writing.