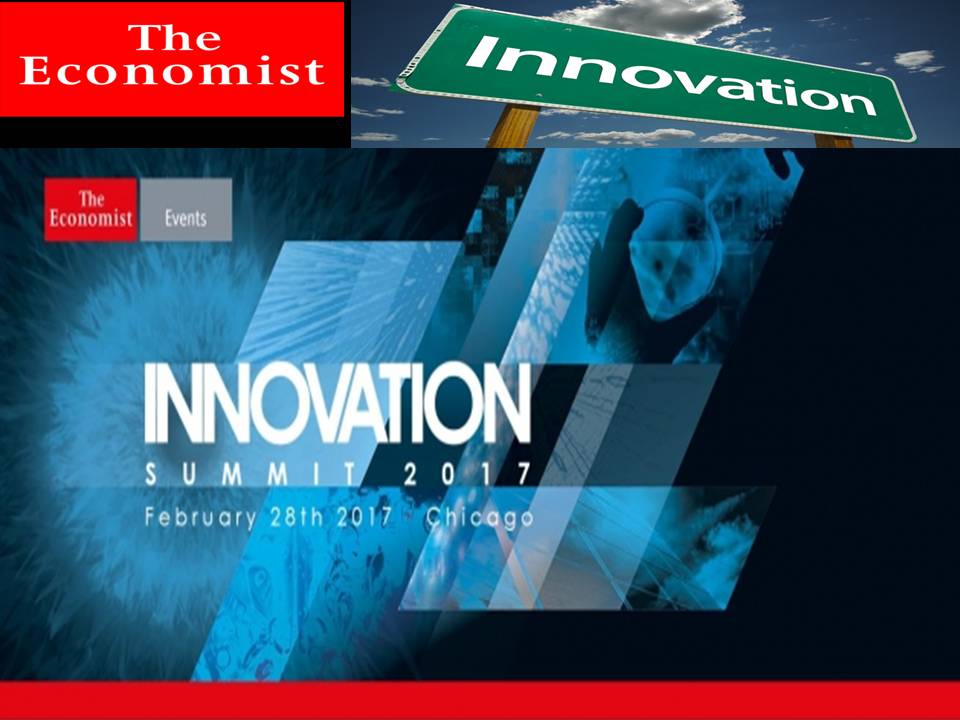 On February 28 2017, The Economist’s Innovation Summit gathered leading thinkers and practitioners to explore the opportunities and challenges of making this transition in Chicago . Economist editors asked the searching questions as Fortune 500 CEOs, policymakers and disruptive entrepreneurs shared their insights and strategies for successful digital transformation.

The Innovation Summit is designed for C-level and senior executives responsible for information, technology, strategy, and marketing, who are charged with driving innovation and new product development—across industries and sectors within their business. Attendees participated in a full day of stimulating, interactive discussion and debate.

Moderator was Vijay Vaitheeswan who is China business editor of The Economist..

Vijay V. Vaitheeswaran is an award-winning senior correspondent for The Economist. His new book on the future of global innovation, published by Harper Collins, is “Need, Speed and Greed: How the New Rules of Innovation Can Transform Businesses, Propel Nations to Greatness, and Tame the World’s Most Wicked Problems”. He is currently the magazine’s China business and finance editor. His editorial responsibilities range from business and finance to science, technology and innovation. He is an advisor on sustainability and innovation to the World Economic Forum, and a regular speaker at the Clinton Global Initiative. He teaches at NYU’s Stern Business School, and his commentaries have appeared on NPR and the BBC, in the Wall Street Journal, the Financial Times and the New York Times. He joined The Economist editorial staff in 1992 as its London-based Latin America correspondent, and opened the magazine’s first regional bureau in Mexico City.

Mike Rhodin is Senior Vice President, Watson Business Development. Watson is one of IBM’s most significant innovations in the company’s 103-year history and represents a new era of information technology. IBM Watson is charged with accelerating a new class of “cognitive” solutions, services and apps that will fuel a diverse cloud-based ecosystem of enterprises, academic institutions and entrepreneurs.

Throughout his 30 years at IBM, Mike’s career has been infused with a passion for helping clients extract value from their technology investments, improving their business performance, and simplifying the way people work.

Mike has held a number of general management positions across IBM, including the Software business where he led the introduction of IBM’s social business platform, which IDC has deemed #1 for four years in a row. He was also instrumental in helping build IBM’s globally integrated enterprise when he lead IBM Northeast Europe, which included Germany, UK, Switzerland, Austria and the Nordics.

A major champion of technology and IBM’s advancements in the industry, Mike has delivered a number of speeches worldwide, including Carnegie Endowment for International Peace and Harvard Law School. He also serves on the Partnership of New York City Board and the University of Michigan Computer Science and Engineering National Advisory Board.

Mike joined IBM in 1984 after he graduated from the University of Michigan with a Bachelor of Science degree in Computer Science.

While at IBM she worked on self learning algorithms that detected user location based on IP addresses, which she later incorporated into the Lotus Sametime product. Later, her company Penseev helped users make better connections with their friends based on social data. When not investing, she is hacking on some app or thinking about ways she can be in many places at one time. Shruti also has an MBA from the University of Chicago, where she polished her finance skills before making the switch from engineer/founder to investor.

Ajay Agrawal is the Peter Munk Professor of Entrepreneurship at the University of Toronto’s Rotman School of Management where he conducts research on the economics of artificial intelligence, science policy, entrepreneurial finance, and geography of innovation. Professor Agrawal is a Research Associate at the National Bureau of Economic Research in Cambridge, MA, co-founder of The Next 36 and NextAI, and founder of the Creative Destruction Lab. He is also a co-founder of Kindred. The company’s mission is to build machines with human-like intelligence.