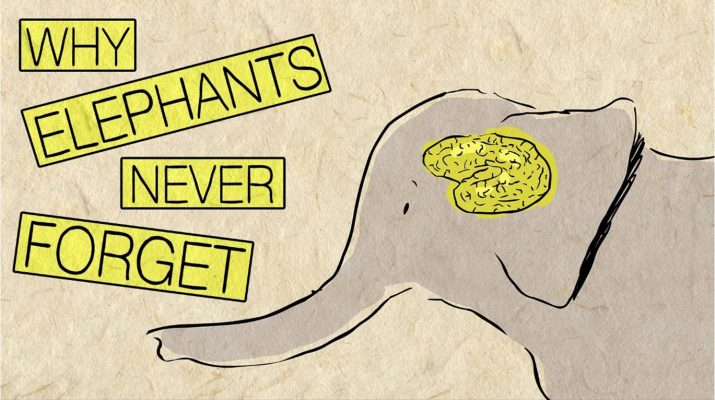 It’s a common saying that elephants never forget. But the more we learn about elephants, the more it appears that their impressive memory is only one aspect of an incredible intelligence that makes them some of the most social, creative, and benevolent creatures on Earth.

Alex Gendler takes us into the incredible, unforgettable mind of an elephant.

It’s a common saying that elephants never forget, but these magnificent animals are more than giant walking hard drives. The more we learn about elephants, the more it appears that their impressive memory is only one aspect of an incredible intelligence that makes them some of the most social, creative and benevolent creatures on Earth.

Unlike many proverbs, the one about elephant memory is scientifically accurate. Elephants know every member in their herd, able to recognize as many as 30 companions by sight or smell. This is a great help when migrating or encountering other potentially hostile elephants.

They also remember and distinguish particular cues that signal danger and can recall important locations long after their last visit. But it’s the memories unrelated to survival that are the most fascinating. Elephants remember not only their herd companions but other creatures who have made a strong impression on them.

In one case, two circus elephants that had briefly performed together rejoiced when crossing paths 23 years later. This recognition isn’t limited to others of their species. Elephants have also recognized humans they’ve bonded with after decades apart. All of this shows that elephant memory goes beyond responses to stimuli.

Looking inside their heads, we can see why. The elephant boasts the largest brain of any land mammal as well as an impressive encephalization quotient. This is the size of the brain relative to what we’d expect for an animal’s body size, and the elephants EQ is nearly as high as a chimpanzee’s.

And despite the distant relation, convergent evolution has made it remarkably similar to the human brain, with as many neurons and synapses and a highly developed hippocampus and cerebral cortex. It is the hippocampus, strongly associated with emotion, that aides recollection by encoding important experiences into long-term memories.

The ability to distinguish this importance makes elephant memory a complex and adaptable faculty beyond rote memorization. It’s what allows elephants who survived a drought in their youth to recognize its warning signs in adulthood, which is why clans with older matriarchs have higher survival rates.

Unfortunately, it’s also what makes elephants one of the few non-human animals to suffer from post-traumatic stress disorder. The cerebral cortex, on the other hand, enables problem solving, which elephants display in many creative ways.

They also tackle problems cooperatively, sometimes even outwitting the researchers and manipulating their partners. And they’ve grasped basic arithmetic, keeping track of the relative amounts of fruit in two baskets after multiple changes.

The rare combination of memory and problem solving can explain some of elephants’ most clever behaviors, but it doesn’t explain some of the things we’re just beginning to learn about their mental lives.

Elephants communicate using everything from body signals and vocalizations, to infrared rumbles that can be heard kilometers away. And their understanding of syntax suggests they have their own language and grammar. This sense of language may even go beyond simple communication.

Elephants create art by carefully choosing and combining different colors and elements. They can also recognize twelve distinct tones of music and recreate melodies. And yes, there is an elephant band.

But perhaps the most amazing thing about elephants is a capacity even more important than cleverness: their sense of empathy, altruism, and justice.

Elephants are the only non-human animals to mourn their dead, performing burial rituals and returning to visit graves. They have shown concern for other species, as well. One working elephant refused to set a log down into a hole where a dog was sleeping, while elephants encountering injured humans have sometimes stood guard and gently comforted them with their trunk.

On the other hand, elephant attacks on human villages have usually occurred right after massive poachings or cullings, suggesting deliberate revenge. When we consider all this evidence, along with the fact that elephants are one of the few species who can recognize themselves in a mirror, it’s hard to escape the conclusion that they are conscious, intelligent and emotional beings.

Unfortunately, humanity’s treatment of elephants does not reflect this, as they continue to suffer from habitat destruction in Asia, ivory poaching in Africa, and mistreatment in captivity worldwide.

Given when we now know about elephants and what they continue to teach us about animal intelligence, it is more important than ever to ensure that what the English poet John Donne described as “nature’s great masterpiece” does not vanish from the world’s canvas.

One thought on “Elephants Never Forget!”