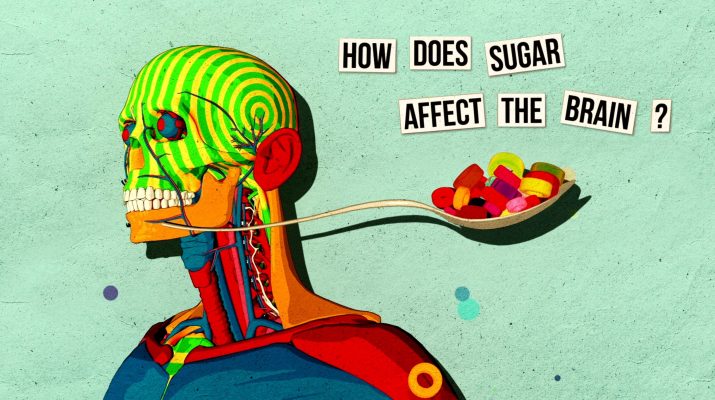 When you eat something loaded with sugar, your taste buds, your gut, and your brain all take notice. This activation of your reward system is not unlike how bodies process addictive substances such as alcohol or nicotine — an overload of sugar spikes dopamine levels and leaves you craving more.

With this video prepared by TED-Ed, Nicole Avena explains why sweets and treats should be enjoyed in moderation.

Picture warm, gooey cookies, crunchy candies, velvety cakes, waffle cones piled high with ice cream. Is your mouth watering? Are you craving dessert? Why? What happens in the brain that makes sugary foods so hard to resist?

Sugar is a general term used to describe a class of molecules called carbohydrates and it’s found in a wide variety of food and drink. Just check the labels on the sweet products you buy. Glucose, fructose, sucrose, maltose, lactose, dextrose, and starch are all forms of sugar. So are high-fructose corn syrup, fruit juice, raw sugar and honey; and sugar isn’t just in candies and desserts, it’s also added to tomato sauce, yogurt, dried fruit, flavored waters or granola bars.

Since sugar is everywhere, it’s important to understand how it affects the brain. What happens when sugar hits your tongue? And does eating a little bit of sugar make you crave more? You take a bite of cereal. The sugars it contains activate the sweet taste receptors, part of the taste buds on the tongue. These receptors send a signal up to the brain stem, and from there, it forks off into many areas of the forebrain, one of which is the cerebral cortex.

Different sections of the cerebral cortex process different tastes: bitter, salty, umami, and in our case, sweet. From here, the signal activates the brain’s reward system. This reward system is a series of electrical and chemical pathways across several different regions of the brain. It’s a complicated network, but it helps answer a single, subconscious question: should I do that again? That warm, fuzzy feeling you get when you taste Grandma’s chocolate cake? That’s your reward system saying, “Mmm, yes!” And it’s not just activated by food; socializing, sexual behavior, and drugs are just a few examples of things and experiences that also activate the reward system. But over-activating this reward system kick-starts a series of unfortunate events: loss of control, craving, and increased tolerance to sugar.

Let’s get back to our bite of cereal. It travels down into your stomach and eventually into your gut. And guess what? There are sugar receptors here too. They do not taste buds, but they do send signals telling your brain that you’re full or that your body should produce more insulin to deal with the extra sugar you’re eating.

The major currency of our reward system is dopamine, an important chemical or neurotransmitter. There are many dopamine receptors in the forebrain, but they’re not evenly distributed. Certain areas contain dense clusters of receptors and these dopamine hot spots are a part of our reward system. Drugs like alcohol, nicotine or heroin send dopamine into overdrive, leading some people to constantly seek that high, in other words, to be addicted. Sugar also causes dopamine to be released, though not as violently as drugs, and sugar is rare among dopamine-inducing foods. Broccoli, for example, has no effect, which probably explains why it’s so hard to get kids to eat their veggies.

Speaking of healthy foods, let’s say you’re hungry and decide to eat a balanced meal. You do, and dopamine levels spike in the reward system hot spots, but if you eat that same dish many days in a row, dopamine levels will spike less and less, eventually leveling out. That’s because when it comes to food, the brain evolved to pay special attention to new or different tastes. Why? Two reasons: first, to detect food that’s gone bad; and second, because the more variety we have in our diet, the more likely we are to get all the nutrients we need. To keep that variety up, we need to be able to recognize a new food, and more importantly, we need to want to keep eating new foods, and that’s why the dopamine levels off when food becomes boring.

Now back to that meal. What happens if in place of the healthy, balanced dish, you eat sugar-rich food instead? If you rarely eat sugar or don’t eat much at a time, the effect is similar to that of the balanced meal, but if you eat too much, the dopamine response does not level out. In other words, eating lots of sugar will continue to feel rewarding. In this way, sugar behaves a little bit like a drug. It’s one reason people seem to be hooked on sugary foods. So think back to all those different kinds of sugar. Each one is unique, but every time any sugar is consumed, it kick-starts a domino effect in the brain that sparks a rewarding feeling. Too much, too often, and things can go into overdrive. So yes, overconsumption of sugar can have addictive effects on the brain, but a wedge of cake once in a while won’t hurt you.

How does a big bowl of sugary cereal or a candy bar affect the brain? In this conversation with Jessica P.Johnson, you will realize what happens in the brain during a sugar rush, and how that changes when sugar is swapped out with artificial sweeteners.

Freelance science writer and podcast producer with degrees in biology, microbiology, and science journalism, Jessica P.Johnson had reported with Dr.Nicole Avena, a research neuroscientist, author, and expert in the fields of nutrition, diet, and addiction. This reporting was done for BrainFacts.org. Here this sweet conversation is:

We’ve all felt that burst of sudden energy that comes after eating a candy bar. But have you ever wondered why we often crave sugary foods even when we’re not particularly hungry? And why does sugar have such a different effect on our brains than, say, a plate of lima beans?

Scientists have only begun to track down the answers to these questions, but interest in this line of research has grown as the overconsumption of sugars increasingly links to a laundry list of health problems including diabetes, heart and liver disease, and obesity.

So what happens to our brains when we consume sugar? And are sugar substitutes effective means of controlling our sugar consumption? To explore these questions, I spoke with two neuroscientists about how sugars and artificial sweeteners affect our brains.

Avena: My name is Dr. Nicole Avena, I’m an assistant professor at Mount Sinai School of Medicine in New York City. On average, the typical American consumes 22 teaspoons of added sugar each day and this is much greater than what the World Health Organization recommends. And you have to keep in mind this is added sugar that’s put on top of the sugar that’s naturally occurring in foods.

SfN: The American Heart Association recommends a maximum of only six teaspoons of added sugar for women and nine for men, approximately the amount of sugar contained in a single can of soda.

Avena: Research has found that when lab rats consume too much sugar, they will actually show changes in the brain that are consistent with what you might see with an addiction to a drug of abuse. So changes in neurotransmitter release, changes in gene expression. And this may play a role in the reason why many people have a hard time cutting back on their intake.

SfN: Normally, when we consume sweet-tasting foods, taste receptors in our taste buds send signals to the brainstem where cells that produce the neurotransmitter dopamine are located. Dopamine is released and activates the brain’s reward system, generating pleasurable sensations. This pleasure reinforces the desire to consume that sweet food again. A sweet-tasting food will stimulate the reward system even if it contains a calorie-free artificial sweetener. But there are important differences in the effects that sugars and artificial sweeteners have on the brain.

de Araujo: I am Ivan de Araujo, I am an associate fellow at the Pierce Foundation in New Haven Connecticut. And I am also an associate professor of psychiatry and physiology at Yale University.

When you substitute one component in foods with another, even if you are trying to fool the brain by mimicking the taste, the brain still is going to recognize them as different. If we make an animal hungry, what we see is that if we offer them an artificially sweetened beverage, they are going to consume a lot of it initially, but somehow they detect the fact that this solution is useless in terms of compensating for their physiological state.

SfN: So how does the body eventually figure out that an artificial sweetener can’t provide the calories it desires?

de Araujo: There is some sort of caloric sensor for sugars that is not related to the ability of the mouth to sense sweetness. The rewards systems in the brain are sensitive to sugars in a way that does not depend on sweetness but does depend on the energy that sugars contain.

de Araujo: I think that the main problem with artificial sweeteners is that they are inert physiologically. And for individuals who have experience with sugars when they are in a state of hunger, their experience is going to be a disappointing one. So I think the problem is likely to be a behavioral switch toward sugars.

Avena: It’s important when you’re looking at a label on a food product that you’re aware of the ingredients. Many granola bars that are marketed as low calorie can often contain as much sugar as a candy bar. I think in general we evolved to understand that food was going to be scarce and so when you find it you have to eat it. It just happens to go awry a bit when we put ourselves in our modern food environment.

SfN: Thanks for listening. Check out more information about how your diet affects your brain at BrainFacts.org.