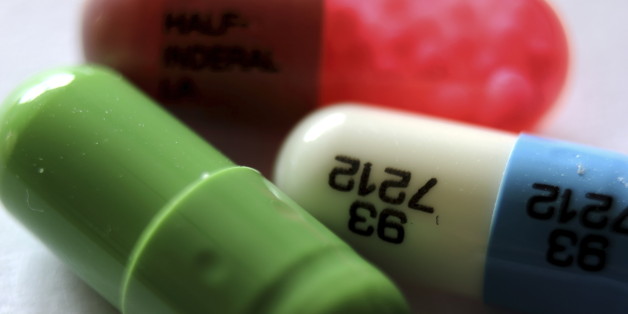 Mental health is incredibly complex, due in no small part to the complicated interactions of chemicals and neuroreceptors in our brains.

Here are four common misconceptions about antidepressants, and what the science behind them actually shows.

Honestly, there’s nothing clever or funny to say about depression. If you’ve ever known someone who was depressed or experienced it yourself, you know how hard and all-consuming it can be.

The good news is that depression can be treated with therapy and medication, but antidepressants can also be kind of complicated, and there are a lot of misconceptions that only increase the stigma around them.

One common misconception is that antidepressants don’t actually do anything—but that’s not true: they do help. This idea mostly came from a 2008 study published in PLOS Medicine. The study was a meta-analysis, meaning that it analyzed a bunch of other studies—in this case, 47 of them—and looked for a measurable effect across all of their results.

It suggested that for people with mild to moderate depression, antidepressants don’t work much better than a placebo, a treatment that makes you think you’re being treated, but doesn’t actually do anything.

Instead, the study found that antidepressants work better for people with more severe symptoms.There was another meta-analysis in 2011 that found antidepressants were more effective than placebos in treating mild, long-term depression, called dysthymia or persistent depressive disorder, but that didn’t stop the controversy around the first study.

It turns out that if you didn’t look at the methods for that first meta-analysis, it was easy to misinterpret the findings. For one thing, the average length of the treatment in those studies was just 4 to 8 weeks, whereas most people take antidepressants for months.

Research subjects were also selected and treated differently than they would be as patients. In real life, a patient and their doctor will work to find the best dose and kind of medicine, because the same medication doesn’t work for everyone, especially when it comes to mental illness. But in a study, everyone’s given the same prescription.

So if you’re just looking at whether one antidepressant is better than a placebo if you give it to everybody, then yeah, you’ll find it’s not that helpful for mild to moderate depression, because a bunch of the subjects won’t respond well to that particular medication. But that doesn’t mean antidepressants as a whole aren’t effective—as long as you’re taking the right medicine for you.

Which brings us to another misconception: that all antidepressants do the same thing, so if one doesn’t work for you, none of them will. But that’s also not true, because different antidepressants do different things. To understand why, it helps to know a little bit about neuroscience.

Your brain is full of neurons, which have tiny gaps between them called synapses. Neurons communicate by sending chemicals called neurotransmitters across synapses to each other.

Reuptake inhibitors, for example, prevent neurotransmitters from being reabsorbed into neurons, so they stay in the synapse longer.

The most common kind are SSRIs, or selective serotonin reuptake inhibitors, which affect the neurotransmitter serotonin. They’re the more famous ones, like Prozac and Zoloft.

Then there are antidepressants that work totally differently, like monoamine oxidase inhibitors, which prevent neurotransmitters in the synapse from being broken down. Plus a whole bunch of others that I didn’t even mention.

So, not all antidepressants are identical, and doctors have plenty of options for figuring out what’s best for different people. Most of the antidepressants we use these days are really safe, but like a lot of medicines, they still have some side effects. For example, people who start taking SSRIs often experience digestive side effects like constipation, diarrhea, and bloating. Which might seem confusing, because when you think “serotonin,” you probably think “brain.”

But that’s our third misconception: that antidepressants only affect your brain. Because they can affect your gut, too! About 95% of your serotonin actually goes to your digestive tract, where it controls smooth muscle function, regulates stomach acid, and controls mucus production. Increasing the amount of serotonin in your brain can lead to a shortage in your gut, which causes those unpleasant symptoms.

Antidepressants can have such a big effect on the digestive tract that doctors prescribe them to treat irritable bowel syndrome, too. Thankfully, most of these side effects do go away after a few weeks and aren’t anything to worry about. It can also take a few weeks—usually 4-6—for antidepressants to start working at all.

And that’s the last misconception on this list: that antidepressants start working right away. It’s still unclear why there’s this delay. Antidepressants start impacting those neurotransmitters right away, even if you can’t feel it. One possibility is that instead of directly improving your mood, the extra neurotransmitters help by gradually affecting the way you process thoughts. The delay might also have to do with other signaling molecules in your cells that could be involved in depression but take longer to respond to the meds.

But either way, even if you don’t notice a change at first, that doesn’t mean the medicine isn’t going to work. So, there’s a lot of misinformation and confusion about antidepressants out there. But for many people, they make a huge difference, so figuring out what’s true and what’s not is definitely worth it.